Australian Foreign Minister Julie Bishop did meet with President Rodrigo Duterte in Davao City on March 17, but she did not tell human rights groups not to fight the Philippine president and to help him win his drug war instead, as per claims of several online articles.
[ads2]
But Duterte’s fan pages on Facebook, “Atty. Rody R. Duterte Supporters” and “Solid and Loyal DuterteCayetano for Federalism,”did not even bother checking the veracity of these claims and just shared the article, gaining almost 2,000 shares in total between the two pages’ posts. The story, carried by blogs like pinoybalita.net and topinformatictrends.blogspot.com, were sourced from the fake news site Aljazeera-channel.com. 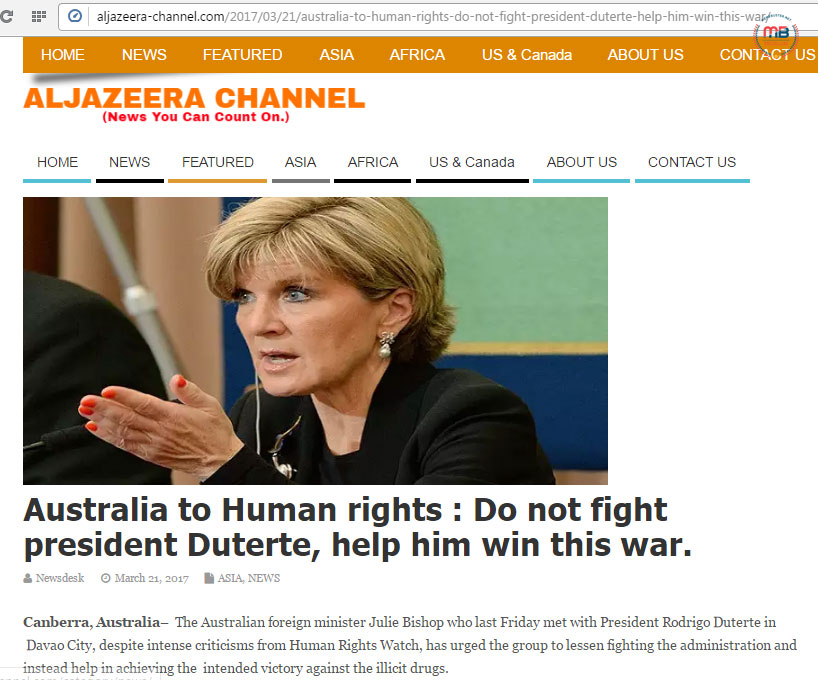 However, Bishop did not say this. Instead, in her statement contradicting Duterte’s claim that they did not talk about human rights during their meeting, she said, “I conveyed Australian and international concerns with respect to extra-judicial killings and spoke of the importance we attach to human rights and the rule-of-law.”

This statement alone shows that Bishop is as concerned as the human rights groups about the killings linked to the Philippine government’s drug war. It is not likely that she would tell the human rights advocates to “not fight” Duterte and help in his war against drugs instead. Moreover, you cannot find credible reports covering such statement from Bishop anywhere, except from the fake news site Aljazeera-channel.com and the blogs that picked up the false story.

In October 2016, Bishop also encouraged Manila to stop EJK and give drug suspects a chance to take their case to the local courts.

The Australian government is concerned about ongoing reports of human rights violations in the Philippines and we are monitoring the situation closely,” Bishop said, as quoted in the Australian Financial Review report.

“We urge the government to ensure the cessation of extrajudicial killings and offer all Filipino citizens their rights according to the country’s criminal justice system,” she added.