Facebook page Favradio posted a collage of photos of convicted Algerian hacker and malware developer Hamza Bendellajd with a caption claiming that the hacker died. Based on the photos alone, it was implied that he died by hanging.
[ads2]
Favradio wrote, “The smiling Hamza Bendellajd, a computer science graduate, one of the World’s greatest hackers. He withdrew more than 400 million from 217 banks and gave it to charities in Africa and Palestine. He stated that money and power are nothing if they are not used to build a better World. R.I.P TO THE SMILING HACKER.” Along with this caption were three photos of Bendellajd, two of him during his capture in Thailand in January 2013, while one was of someone about to be hanged. At first look, you’d think the man waving at someone in the crowd with a rope around his neck was Bendellajd. They do have similarities.
[ads1]
However, a closer look and a Google Image search later, we found out that the hanged man is certainly not Bendellajd. He turned out to be Majid Kavousifar, an Iranian civilian sentenced to death by hanging after killing a local judge. Kavoursifar died in 2007.

We also found this false meme about Kavousifar, passing him off as Bendellajd. 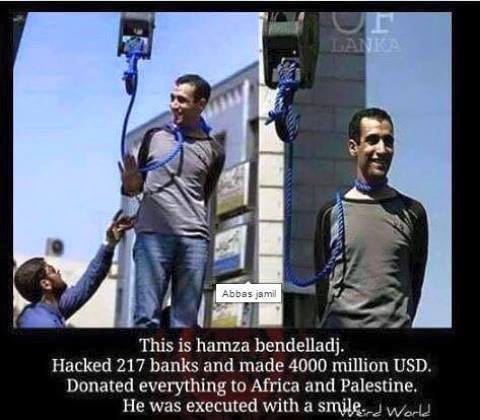 We also found out that this is not the first time Kavousifar’s hanging photo was used in a hoax. GMA News Online also debunked a hoax in 2013 that used Kavousifar’s photo, claiming that he was a Christian who died a martyr. But was Bendellajd really sentenced to death by hanging?

On April 18, 2016, Aljazaeera published a report about how Bendellajd could be sentenced up to 60 years in American prison for developing and using a computer virus to steal millions from bank accounts.

But an Aljazeera report on April 23, 2016 showed that Bendellajd was sentenced by an American court to 15 years in prison and three years of supervised released for developing and distributing the malicious SpyEye malware.

Bendellajd was about to travel to Malaysia to reach Algeria when he was caught in transit in Thailand in 2013. He was later extradited to the US.

In a September 2015 report, Aljazeera also wrote about the death sentence rumors floating about Bendellajd online. However, this was debunked by US authorities and even by the US ambassador to Algeria Joan Polaschik herself, who said that “computer crimes are not capital [ones] and are not punishable by the death penalty.”

The website thecryptosphere.com translated Polaschik’s tweets from French to English.

Thecryptosphere.com translated this into: “1/2 Bendelladj Hamza pleaded guilty June 26 for having developed, distributed, and monitored a malicious SpyEye banking Trojan.”

This translates to: “2/2 The verdict will take place in a few months. Computer crimes are not capital crimes and are not punished by the death penalty.”

So, Favradio’s message of condolence about the hacker’s death is not exactly appropriate because it’s not true that Bendellajd died by hanging. He did not commit a capital crime that deserved the death penalty so he is still serving his sentence in the US prison.