“President Obama noted that the successful election and record voter participation were emblematic of the Philippines’ vibrant democracy. The President highlighted the enduring values that underpin our thriving alliance with the Philippines and the longstanding ties between our two peoples, including our shared commitments to democracy, human rights, rule of law, and inclusive economic growth,” said the statement from the White House.

The White House added that both Obama and Duterte “affirmed their interest in seeing the relationship continue to grow on the basis of these shared principles.”

While Obama commended our country for observing democracy through the elections and have once again expressed interest in maintaining a relationship with the Philippines, the US president did not say anything about Duterte’s administration making the Philippines “the fastest richest growing country,” as claimed by this blog.

But this did not stop this pro-Duterte Facebook page from sharing that blog at all. If you click on the link in the post, you’d be even more confused after reading the article. It looks like a result of an article spinning software because of the choice of words that you can barely understand. 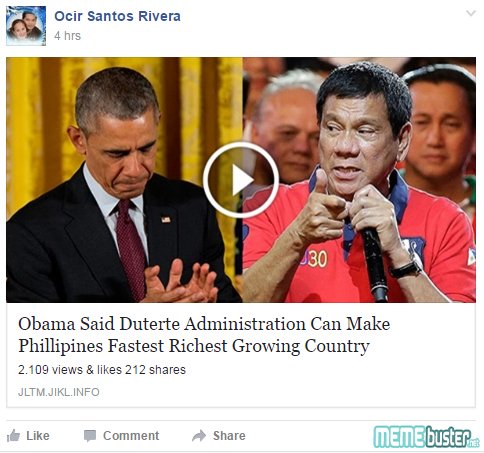 If you click through to the blog content, you’ll find a more readable version of the article that was posted in the previous blog. But hey, they even got the spelling of “Philippines” wrong!

We tried looking for what Obama could have said about Duterte and could barely find his statement due to the absence of proper quotation marks.

Obama supposedly said, “Duterte truly loves a Filipino persons. No matter how high class corrupt and criminals if you against the laws you must be punish.”

Yes, that’s how exactly the blog wrote what allegedly was Obama’s statement on Duterte!

And as if the poorly written statement was not enough, the blog even dared to include a heavily edited video that made it look like Obama was interacting with Duterte.

The YouTube video was even entitled “Barack Obama Interviews Duterte” and has a caption that says, “Pres. Barack Obama ask Duterte about his plans for the Philippines…”

At least they got the “Philippines” spelling right this time.

But no, it’s easy to see that the video is a spliced one, provided those who see it are not blinded by their die-hard support for Duterte.

Obama’s clips were of him during the Asia-Pacific Economic Cooperation CEO Summit. He shared the stage with world billionaire Jack Ma and Aisa Mijeno, founder of local startup Sustainable Alternative Lighting (SALt).

He has never shared a state with Duterte, so far.

So, it makes it easier for us to bust that no, the only official communication between Obama and Duterte was when the former called to congratulate him after on May 17. Whatever the blog posted on those pro-Duterte Facebook pages claimed was fake and merely made up statements.