Memebuster just posted an article about 911 Philippines’ Facebook page making a seemingly misleading post using a video of the fire truck turnover last February 19, 2016 when we got another tip that another FB page is using that video without starting the accurate facts.

Here’s our article busting 911 Philippines correcting its FB post after netizens hounded them to state the right information about the video. 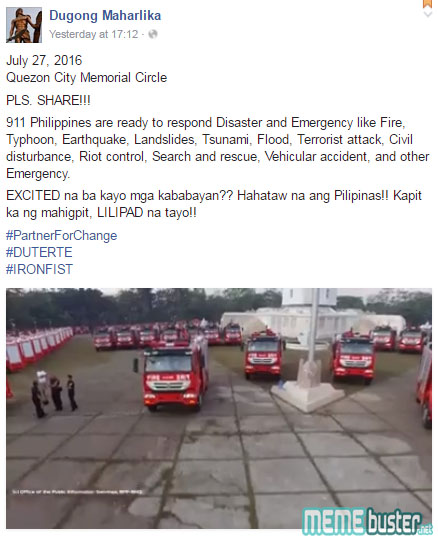 This line is obviously based on 911 Philippines’ post, with a slight variation:

But while 911 Philippines already corrected their post a few hours ago by adding a third paragraph explaining the event that that was captured in the video, Dugong Maharlika proudly headed their caption with “July 27, 2016, Quezon City Memorial Circle,” selling it as  recent event when it wasn’t.

Based on the comments, the netizens definitely think that the event with the fire trucks and their colorful waterworks happened yesterday when it didn’t! Dugong Maharlika has succeeded in duping the netizens! However, some netizens were questioning why such an event wasn’t on the news. Others also tried getting the facts straight. Yes, the availability of the streamlined 911 hotline will be such a huge help to the Filipinos during emergencies, so it’s something worth celebrating and praising President Rodrigo Duterte’s administration for.

However, Dugong Maharlika is misleading netizens by claiming that the fire truck event happened yesterday, making it seem like the fire trucks were procured by Duterte when it wasn’t the case at all. Those 155 fire trucks featured in the video were already distributed to local government units in March, as shown in this photo uploaded by the Bureau of Fire Protection. These fire trucks will be instrumental once the 911 emergency response services are implemented this August.

Hopefully, this FB page will pull off what 911 Philippines and apologize and correct their post by giving the accurate facts involving the video they used.