A video circulating online and picked up by blogs have been claiming that a US senator defended Duterte and slammed the opposition Yellows. The featured image showed a man in suit and tie holding what appeared to be a photo of President Rodrigo Duterte.

Some of the blogs that posted the video are phchronicles.info, topnewsph.info, and dutertewarriors.info, duterteparallel.org. The video has been shared at least 20,000 times on Facebook. We clicked on one of the blogs and found an almost 19-minute YouTube video. The one we watched even had a “Protect the President” phrase in the video itself. We watched the entire length of the YouTube video but we could not find what the headline was claiming as a US senator defending President Rodrigo Duterte and hitting the Yellows, or the Liberal Party.

What we found instead was Human Rights Watch (HRW) Deputy Director Phelim Kine talking in the US congressional hearing about the human rights situation in the Philippines. He definitely is not a US senator, as the headline claimed, and he was not defending Duterte.

Here is a clearer photo of Kine taken during that US congressional hearing on July 20, 2017: 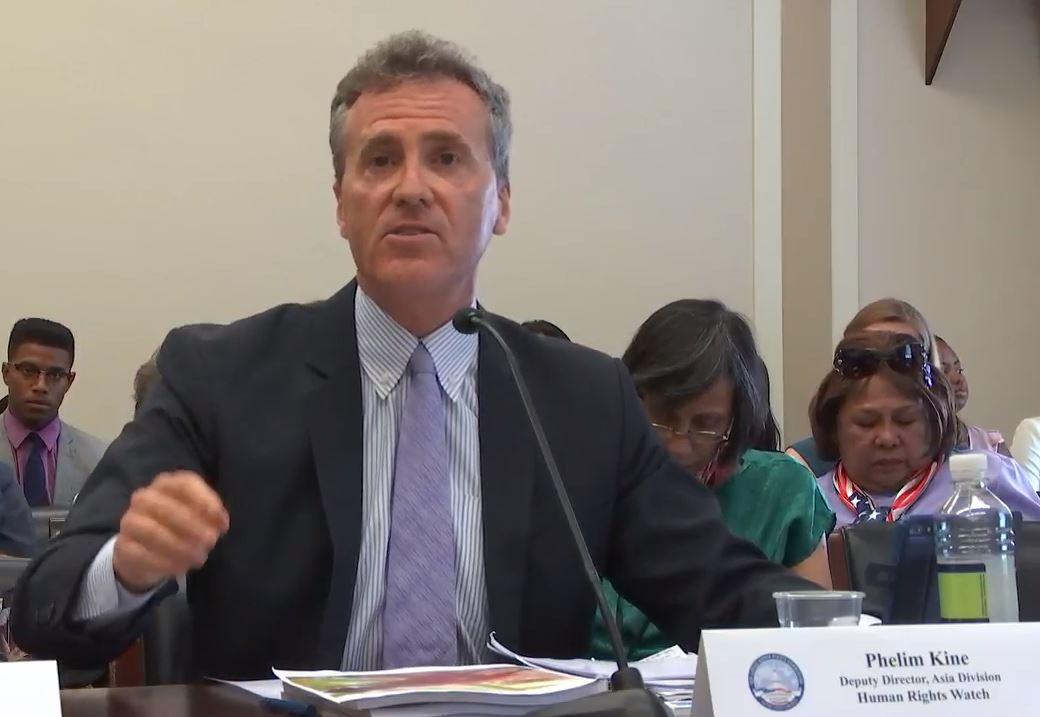 Kine even tweeted about it.

Throughout the 19-minute video, all Kine and Carlos were talking about were the human rights violations in the Philippines, no defense for Duterte at all.

advertisement
In the 19-minute YouTube clip, here are some of the things that Kine talked about:

Those who are expecting to watch a US senator defending President Duterte while watching the video would be disappointed. What you’ll find instead are human rights advocates describing the human rights violations in the Philippines and recalling Duterte’s statements that incited violence and included threats against those who go against his war on drugs. Therefore, the headline claiming that a US senator was defending Duterte is a misleading one.

Even the featured image that was used by the blogs sharing the video with the misleading title is an edited one. It was not Duterte’s photo that Kine was holding but an HRW report called “License to Kill” documenting the killings. You can watch the whole video of the Tom Lantos Human Rights Commission Hearing where the 19-minute video was lifted from here:

Unfortunately, it seemed like the admins of the Duterte and Marcos fan pages and some individual Facebook users did not actually watch the content of the video because they still shared the blogs with the misleading headline and even thanked the American senator for coming to Duterte’s defense. Nakakabilib nga, as per what the fan page admin said of the misleading title. It’s truly unbelievable what some people will react to without even reading or watching the content, choosing instead to just rely on the headline.

Even the commenters on the Sara Duterte fan page urged the admin to carefully review the video because the men in the clip were not defending Duterte at all but were against Duterte’s war on drugs.

‘Is this site hacked?’

Busted: Duterte rejected Robredo’s intent to be next DSWD chief? It’s not true at all!