However, the claim came from the satire site Adobo Chronicles.
[ads2]
Remember how the site has a mechanism to separate the truth from the lies? Facts are in Italics while lies are in regular font. Look! 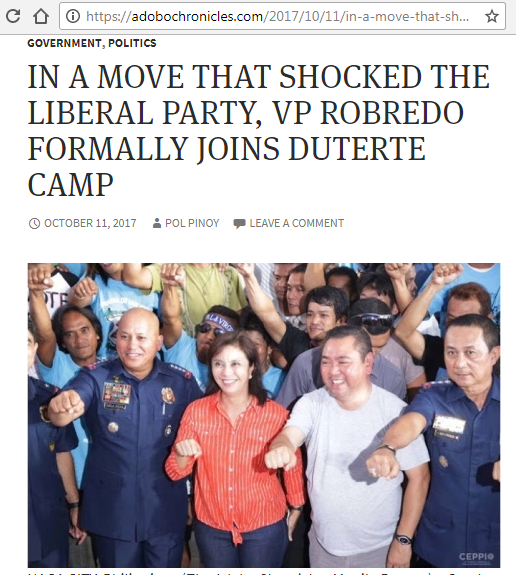 The only facts, in Italics, in the story were the notes about how the Supreme Court decided to keep Senator Leila de Lima in prison and how the House of Representatives voted to have Comelec Chairman Andres Bautista impeached.

According to the satirical article, Robredo realized that the Opposition is “all but dead,” hence her decision to join the President’s political party.

The photo used in the article was even described as a photo taken during her swearing in ceremony together with PNP Chief Director General Ronald dela Rosa.
[ads1]
However, the photo actually surfaced back in September 2016, taken during the oathtaking of the surrenderers in Naga City with dela Rosa, Robredo, Naga City John Bongat, and Naga City Police Office Director PSSupt. Julius Munez, according to an article from bicolstandard.com.

The satirical nature of the piece though did not seem to have reached some Facebook users and groups that still shared the article, treating it as if it’s real news and making it an excuse to bash Robredo.

This Facebook user shared it to a Facebook group, with a caption where she called Robredo names. And the comments showed that many netizens believed the article to be true.

But as what we’ve said, this claim about Robredo jumping to PDP-Laban is not true. It was meant as satire.

Adobo Chronicles has come up with several satirical pieces about Robredo before, such as how #DollarParaKayLeni was launched in San Francisco, she wanted to start a Senate hearing on Senator Manny Pacquiao’s Australian trip, she agreed to go on a BBC Interview with host Stephen Sackur, and and Robredo allegedly said she would resign if Duterte becomes president.
[ads3]