Senator Grace Poe denied claims online that she is pushing to block Facebook in the Philippines and called out this disinformation against her, the very thing that the Senate hearing on “fake news” is trying to fight.

The senator said that banning Facebook in the country was counterproductive and that claims that are spreading online about her were untrue. One of the trending videos about the part of the Senate hearing on fake news on January 30 where Poe asked a resource person about Facebook started with this question from her: “Let’s say, can you block a particular company like Facebook from being accessed in the Philippines? I know they do this in China.”

However, Poe clarified that the video that are now trending online have been “spliced” to make it seem as though she wanted to ban the use of Facebook in the country.

Poe led the series of Senate hearings on fake news as the chairman of the Senate committee on public information and mass media. The second hearing was attended by media representatives, Palace communication officials, and bloggers.

During the January 30 hearing, Poe actually asked a law expert several questions on what the government can possibly do to block hate speech, especially those that are heading towards criminal liability.

“Not that we’re going to do this. I’ll be the first to disagree if they do. But let’s say, can you block a particular company like Facebook from being accessed in the Philippines? Of course that would spark a revolution and we know that. But what I’m saying is this: They’re banking on their popularity but we should also assert their accountability to us,” Poe said.

Addressing the netizens who are now bashing her for the misunderstood portion of the Senate hearing, she urged them to distinguish facts from lies and added that her camp would come up with a full video of the hearing.

“We’ve come up also with our own video of the proceedings, kasi it (video circulating online) was spliced. If you’re conscientious enough and you really want to find the truth…kasi kapag ayaw mong malaman ang katotohanan madali namang kalimutan yan,” she said.

Some netizens also defended Poe’s question during the hearing.

“People, it was a hypothetical question in the hearing. What she’s after was Facebook’s accountability to us as users,” said one Twitter user. 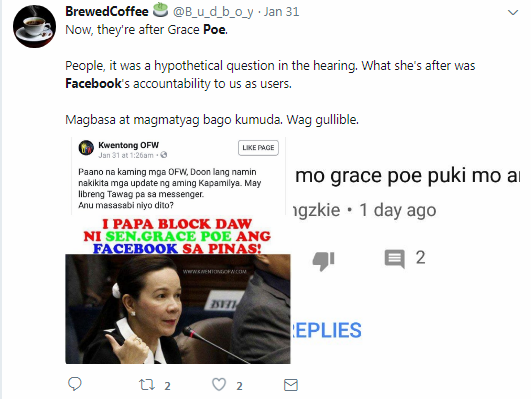 “This is a classic case of misunderstanding,” he said in a Facebook post. “The context was a public hearing. Senators ask questions to resource persons on the issues at hand.”

“Senator Poe asked a technical question of whether it is possible to block FB. She did not suggest that IT SHOULD BE BLOCKED,” he added.

When she opened the Senate hearing, Poe expressed her concern about the spread of fake information that might lead to a “culture of lying” if left unchecked.

“If purveyors are allowed to get away with their lies, they embolden government officials to also lie in order to escape accountability, crush dissent and commit illegal acts with impunity,” Poe said.

“Fake news is the e-version of the budol-budol, which many of our people unable to distinguish fact from fiction fall victims to. It is not even farfetched that in the future fake news can trigger wars,” she added.

“If fake news is not challenged, it will create lynch mobs out of certain people turning them into an army of character assassins who can be unleashed with just one meme to destroy an idea, a person or an institution.”

She also noted how Taiwan teaches its children media literacy in school to help them distinguish factual news from hoaxes.

Poe also brought up how wrong online behavior can be carried over to real life.

“Kung hahayaan natin ‘yan baka lumaki ang mga bata ngayon na intolerant sa pananaw ng iba at madaling maniwala sa haka-haka. We need to expose them in a kind of converasation that eduicates and enlightens, that relies on truth and not the kind that respects facts,” Poe said.

After Badoy calls her fake news purveyor, Robredo says it’s a waste of time to respond to critics

Lumad school to UP protesters: You’ve given us your slots when you welcomed us in your campus many times